Find out about the most common heat trap problems and how to solve issues on water heaters such as the rattling noise, flow restriction problems, thermal expansion through pipes, and loss of energy.

Many of today’s water heaters, especially energy-efficient models, coming from the factories of Bradford White, Rheem, AO Smith, and other manufacturers are equipped with one of the two types of heat traps; flapper type and ball type.

Factory-installed heat trap nipples are easy to locate. They are found on the top of the heater, one with the blue ring where the incoming cold water pipe is attached and the other colored in red for hot water delivery.

The ball-type heat trap has a ball inside the part which is floating under the pressure when water is in use (hot site) while when cold water is entering the tank, water flow pushes the ball down from the seat of the nipple.

There are several problems related to the heat pumps, and these are the thermal expansion or thermosyphoning, noise, and water flow restrictions. 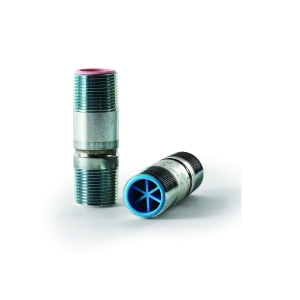 It is easy to notice the problem with the thermosyphoning, because the incoming cold water line (marked in blue), in the area close to the water heater, is hot to the touch of a hand.

What makes it hot is hot water that enters the cold side, from the upper part of the water heater tank - as a result of the combined process of thermal expansion and heat convection.

On some forums, it has been suggested to remove the plastic cap, but the ball will get into the plumbing system and create noise or flow restrictions, even blockage – warn others. Furthermore, the heat traps are dielectric, which helps in corrosion resistance in the case of dissimilar metal connection, so by removing the plastic piece, corrosion resistance might be affected.

Some plumbers suggest removing the existing lines and putting longer, flexible, with the gooseneck in the line or long flex connector bent in a loop, and insulate with the thick insulation to reduce the heat loss through the pipes.

According to some studies, by bending the hot pipes downward, at least 200 mm, you can prevent thermosyphoning or self-circulation, but thermal convection will still be present to a certain degree. In cases where the bending of pipes is not a viable solution, a non-return valve can be used (but will increase the flow resistance).

- Find Plumbers In Your Area -

One of the reasons for the flow restrictions is when the ball is stuck in the heat trap, sometimes due to sloppy job and negligence when soldering the pipe to the tank, making the ball trapped. The solution to this problem is either to loosen this ball by using the screwdriver or replace the part with the heat trap with the flap.

When the heater is in use, water under pressure is flowing around the ball inside the heat trap nipple, so due to the vibration of the ball, the rattle noise starts occurring – noticeable especially in recirculation systems.

The solution to this problem is to replace the ball-type nipple with one which has a rubber flap, similar to the one-way valve used in plumbing.

And keep in mind that by making the water path more difficult on both the hot and cold side, the natural convection is reduced.